We please offer you a super service of real estate facilities and other properties advisories in Chiang Mai.

Accommodation business on mountain of Pong-Hangdong.

Residence building and office on the road of chiangmai-chiangrai, Doisaket, Chiangmai. One-story house on the mountain of chiangmai.

In the Middle of City, Near Airport.

Land to build a house or make a dormitory-apartment.

The rooms are elegant with simplicity, and tranquility among rice fields, ... Streamside-High mountain.

We have 57 guests and no members online

listen)), sometimes written as Chiengmai or Chiangmai, is the largest city in northern Thailand and the capital of Chiang Mai Province. It is 700 km (435 mi) north of Bangkok in a mountainous region.

Chiang Mai (meaning "New City" in Thai) was founded in 1296 as the new capital of Lan Na, succeeding the former capital, Chiang Rai.[3]: 208–209  The city's location on the Ping River (a major tributary of the Chao Phraya River) and its proximity to major trading routes contributed to its historic importance.[4][5] 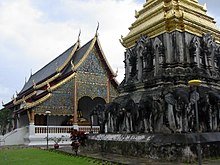 Wat Chiang Man, the oldest Buddhist temple in the city

Chiang Mai succeeded Chiang Rai as the capital of Lan Na. Pha Yu enlarged and fortified the city, and built Wat Phra Singh in honor of his father Kham Fu.[3]: 226–227  The ruler was known as the chao. The city was surrounded by a moat and a defensive wall since nearby Taungoo Dynasty of the Bamar people was a constant threat, as were the armies of the Mongol Empire, which decades earlier had conquered most of Yunnan, China, and in 1292 overran the bordering Dai kingdom of Chiang Hung.

With the decline of Lan Na, the city lost importance and was occupied by the Taungoo in 1556.[10][failed verification] Chiang Mai formally became part of the Thonburi Kingdom in 1774 by an agreement with Chao Kavila, after the Thonburi king Taksin helped drive out the Taungoo Bamar. Subsequent Taungoo counterattack led to Chiang Mai's abandonment between 1776 and 1791.[11] Lampang then served as the capital of what remained of Lan Na. Chiang Mai then slowly grew in cultural, trading, and economic importance to its current status as the unofficial capital of Northern Thailand.

Chiang Mai has improved its government and raised its status as a "province" since 1933 until the present.

In May 2006 Chiang Mai was the site of the Chiang Mai Initiative, concluded between the Association of Southeast Asian Nations and the "ASEAN+3" countries, (China, Japan, and South Korea). Chiang Mai was one of three Thai cities contending for Thailand's bid to host the World Expo 2020.[14] Ayutthaya was ultimately chosen by the Thai Parliament to register for the international competition.[15]

"...Chiang Mai represents the prime diamond on the crown of Thailand, the crown cannot be sparkle and beauteous without the diamond..."

From Wikipedia, the free encyclopedia

high land near the Coffee plantation of Doisaket,

Read more: Sale 3 bedrooms House on creek side, on the road to ChiangRai, Doisaket District, Chiangmai.

A Big House with a little house and garden next to Ping river,

on the road to handong district,

Two-storey house with 3 bedrooms, next to the asphalt road,

next to the Li River, Srivichai Subdistrict,

Resort house next to a stream, 3 rai on the mountain,

Decorate and build like a resort in a natural forest.

next to a concrete road, village, Pong Yang sub-district,

30 rai, next to the Road, Sop Poeng Subdistrict,

Land next to nature, 28 rai and little,

next to the four-lane road, Chiang Mai to Chiang Rai,

Land with 1storey shophouse, Highway side of Pamieng,

Land on a hill next to the road

Read more: Land on the road 293sqw the highway to ChiangRai, Mountain of Doi saket, Chiangmai.

Land on a hillside at Pongyeang Valley, Maerim real estate.

This land is suitable for the resort project, Chiangmai hillside land.

One of the attractive hillside slope land at Pong Yeang valley.

Suitable for real estate projects, nearby attractive place of Maerim. Houses at Country side, Chiangmai.

House for sale, a 2-storey house in the longan garden floor,

next to the road along the Ping River,

Modern style house in the middle of the rice field,

In front of the house is a terrace.

Next to the moat of Chiang Mai

A guest house inside the City moats.
Nearby Thapae gate and Sunday walking street.

Hotel in Valley of Maerim, Chiangmai.

Ready to operate, 35 rooms with facilities.

A-Pha Learning Center was born from a group of teachers and parents who use the Waldorf approach to education for children.

From the coffee farm on high Mountain to your cup.

Over 10 years of experience in roastery.

Mini Van which carry any stuff.

Tram sightseeing of the city of Chiang Mai, cultural tour around the city.